Apologies for my lack of recent posts, I've only had this blog for a month or so and am already neglecting it, however after going back to college I have been exhausted constantly and have been only able to tackle things that I can achieve lying down with my eyes shut!

Today I am going to be writing a bit of a different post, obviously a lot of this is my own opinions and I want to advise you not to read on if you are easily triggered by discussion of weight and eating. For the last two or three weeks I have wanted to post on this blog about what I bought in the sales, or my makeup favourites or even tutorial/cooking posts, but I just couldn't do it. I couldn't make myself pretend to be chirpy about fashion when in reality I have been too tired to focus on the things I normally enjoy. Therefore today I am going to be discussing exactly how thin, "too thin" is, I can really only scrape this topic in a blog post but I will give it a go.

Ever since I have been small I have associated being thin with being happy. It wasn't like I believed that if you were bigger, you weren't a good person, or you weren't capable of achieving important things. I just thought that somehow, if I was skinnier all the problems I had would be solved. That somehow it would make me happier, more popular or more likeable. It doesn't matter whether I am 90 lbs or 190lbs I will still be the same person, realistically, if someone likes you more because your thinner, then frankly they aren't a real friend. 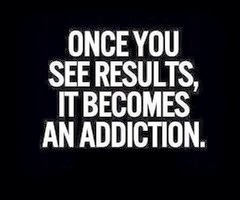 I started off earlier this year wanting to shift a bit of weight, I was over 10 and a half stone and felt unhealthy, unfit and unattractive, I then reached my goal of 10 stone. But I couldn't stop there, I then wanted to be 9 stone 10lbs, then 9 stone 6lbs, until I found myself at 8 stone 10 lbs, still feeling if I could just loose a little bit more then I would be happier, feel stronger. I am over 5'8' so of course, I know deep down that being much lighter won't be healthy but it is addictive, and there is a small part of me that felt comfortable being in the danger zone. My sister suffered with an eating disorder so I was well aware of the destructiveness, but it didn't stop me from wanting to constantly "beat" those around me, as if being underweight would make me better.

I don't exactly believe that the media encourages women to be thinner, but I do think that a lot of the health trends that are boasted as being safe ways to loose weight are actually promoting an unhealthy attitude to food. That in fact a lot of social media that promotes itself as being a "fitness" source is in fact responsible for a lot of ugly habits.  One of the biggest trends is the "clean eating" seen plastered all over instagram, this in itself says to women that food that isn't fruit or vegetables is "dirty". That we should feel guilty for eating foods that have any fat in them, or aren't the bare minimum we need to fuel ourselves. The sad thing is that these posts are not even marketing themselves as "pro ana" (that is a whole other awful kettle of fish" but are instead claiming to have a healthy attitude to diet. Women should not be encouraging each other to feel guilty about eating. Obviously over indulgence is a bad thing, but the occasional slice of cake isn't going to make you fat, in fact the average person needs at least 25%- 35% of their diet to be made up of fat.

I personally don't read fashion magazines very often, finding them over priced and lacking in content, so I am not hugely influenced by them but I would say that tumblr, instagram and even twitter have played a large part in my obsession with being "thin". There is a general trend of glamorising eating disorders and being under weight as the "in" thing, obviously if you are naturally thin like Kate Moss etc. that is brilliant but I think there needs to be a bigger acceptance that not everybody can be tiny, you cannot change your genes, you cannot rip apart you skeleton and give yourself a wider thigh gap, longer legs or smaller shoulders. Women seem to love to make other women feel guilty about their eating habits, constantly searching for what is "normal", when really normal is a socially constructed idea, it doesn't exist beyond the walls of your own mind. 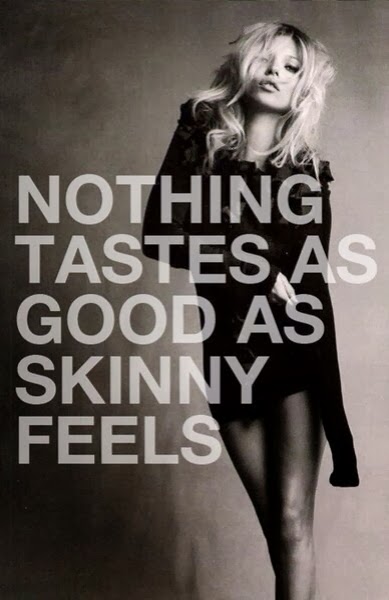 Rather then encouraging people to feel guilty about their eating, maybe we should celebrate the things they can achieve, humans are more than our weight and a life that revolves around calories and food is not a life being lived to the fullest. Instead of encouraging terms such as "clean eating" maybe we should encourage a healthy, balanced diet, Which yes will include cheese, milk and even chocolate if you want it to. Instead of encouraging everyone to aim to be someone else, we should encourage everyone, including ourselves to be happy with who we are, regardless of thighs, cheek bones, and ab definition.

So is there such thing as "too thin"? Of course there is, but health is more important then a number on the scales.